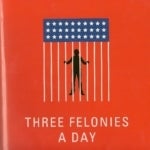 I read an excellent book by Harvey Silvergate this week “Three Felonies a Day: How the FedsTarget the Innocent.” The book contains many examples of innocent people who have been the target of and successfully prosecuted by the United States Prosecutor's Office under obscure federal laws. The premise of the book is that anyone can be prosecuted for anything at anytime.

You know we are   in big trouble when the penal code is bigger than the bible.  It is true: especially in California now there are so many complicated laws that many people commit a criminal offense without even knowing they have done so.

The list of state and federal crimes is long, cumbersome, and even baffling. Under California law, failing to walk with a lantern at night while on horseback is a crime, but it is not a crime to ride a horse drunk.

I could list literally thousands of criminal offenses of which most people aren't aware. I know a small Mexican restaurant that was fined and shut down because they were playing Mexican music on the radio while their clients dined, a supposed commercial use of the music.

Don't even think about snipping that label off of your pillow that says it contains fire retardant because you are committing a crime. And remember you must post a sign that says that you have any substance that may produce cancer on your premises. Who doesn't have a room in their home that is painted, carpet that has been protected by a chemical, or maybe a pack of cigarettes in a drawer somewhere? Maybe those are my three felonies a day.

And the judges of imposed and stretched these laws to the point of absurdity. Recently, an appellate court in San Diego upheld a case of child endangerment because of drugs that were found buried in a plant container in a residence the child thirteen year old child visited infrequently. What child in their right mind of this age would dig in the plant container and eat the contents inside? Isn't it just as dangerous to keep bleach or medicine in a house?

Heaven forbid that an adult give a child even a small quantity of alcohol. I remember the philosophy of my grandmother, who lived to be one hundred and one years old, was that as an adolescent I should try beer at home for the first time at home and not on the street. Many parents allow their older teenagers to drink infrequently at home on special occasions like a small glass of champagne at Christmas. If I were a child today, I could have the San Diego Police Department or ICE at my door with laser rifles pointed at everyone for furnishing alcohol to minors. Merry Christmas, U.S. style!

I recently had a client who was charged with piracy. I thought he had stolen a boat, but he had only sold some pants that he bought in Los Angeles that were counterfeit and made in China. He didn't know they were counterfeit, and they looked so real the police seized many real pants with the fake ones. Yes, of course, this was a felony and ended a potential law enforcement career for him. Of course, no federal government administration would dare ruffle the feathers of our biggest creditor-China and ask them to help stop the flow of the counterfeit goods, which they actually support to boost their economy.

The philosophy of the feds and state police has been “not to protect,” but to prosecute, “not to serve” but to make all of us feel subservient. Yes, it is official now: we do live in a police state: The not so United States of America–the Blue Union and the Red Union.

When you run afoul of one of these arcane, unintelligible, and yes even asinine ( a polite adjective for ass) laws, call us: we are here to help. There are a still few reasonable prosecutors and police officers left, and we will help you find them and help get you out of a mess that isn't even your fault.

Wait! I am writing this blog during the early morning hours. I think I left my sprinklers running–another crime. I am already on my way to committing my three felonies or at least three crimes for the day!

The last time I was in Ecuador the locals thought I was crazy. As I went down to the beach to take an afternoon swim, I shouted, “I love this country because you can still enjoy a beer on the beach.” They looked at me as if I were loco. If they only knew that here in the United States and California it where things have gotten truly loco. That is why there are so many ex-patriot Americans retiring in foreign countries now.

By the way, I subscribe to a magazine called “International Living.” If the federal government ever pays me my fair share of social security benefits that I have earned all of my career for helping to keep them in check, I will one day probably join them. Of course, my income will remain taxable and reportable to them always even though I will no longer live in the United States. But meanwhile, I will continue to be a San Diego Criminal Defense Attorney/ lawyer, who is “old-school” and will fight for you so that you can keep the few remaining rights and freedoms that you have in a country that is supposed to be the most free country in the world. Sadly, it once was.