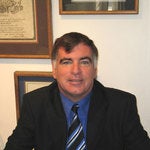 The law firm of Russell S. Babcock was formed to provide the highest quality of federal and state criminal defense services at reasonable prices. We are a full service criminal law firm which gives attention to its clients and brings detailed knowledge and experience to each case. Mr. Babcock has practiced law for more than thirty years. He is fluent in Spanish (Español) and serves both the English speaking and Hispanic community.

Russell Babcock graduated from the University of California, Davis, in the top 1% of his class, with highest honors.  Russell is admitted to the California, Alaska and Colorado bars. He has tried more than one hundred fifty jury trials and practiced law in more than ten states. Russell is one of the few attorneys who divides his practice between trials and appeals, in both state and federal court. Russell has handled very complex cases including; five death penalty cases, complex banking and business conspiracy cases, as well as the most complex federal and state drug cases.

Russell is a tenacious litigator who is willing to travel anywhere to achieve justice. He a former prosecutor and attorney general, which helps him to understand how the government makes it charging decisions and adds credibility to him as a trial attorney.

In 1995 Russell became one of the few state certified criminal specialists in San Diego County. In 1998 he won the prestigious award for “Criminal Appellate Attorney of the Year” given by the San Diego Criminal Defense Bar Association. In 2011 Russell Babcock was named one of the best five criminal defense attorneys in San Diego.  Russell has been named several years as a “SuperLawyer,”  including SuperLawyer 2015. He is an Avvo 10.0 rated attorney.