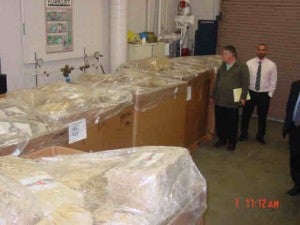 On March 21, 2014 criminal defense lawyer Russell Babcock appeared for sentencing in the case of R.G. Our client had been charged with helping the co-defendant transport thousands of pounds of marijuana from a warehouse to a stash house. What was even worse was that there was a tunnel connecting the warehouse in Otay Mesa to Mexico.

The United States government takes drug tunnel cases very seriously. Not only do drugs pass through the tunnel from Mexico to the United States but money and weapons can pass from the North to the South.

And sometimes the workers in the tunnels are even killed so that there is no possibility they can inform on the location of the tunnel and on their bosses.

Our client was facing the possibility of over 12 years of jail time even though he was very young and had no criminal record. He became involved in this case through the pressure of an older family member.

Many law firms try to settle a case as soon as possible. In this case, we waited for almost two and one half years to receive the best result possible for our client. This is not a good way for a law firm to make money, but it was a strategy necessary to help our client.

To the best of my knowledge, this was the lowest sentence given ever in a tunnel case in United States District Court, Southern Division. In the end, District Court Judge Anthony Battaglia rejected the government's recommendation and sentenced the defendant to the defense recommendation of only thirty seven months in custody. With time already served, R.G will be free in about three months. This was the literal and figurative light at the end of the tunnel!

Russell Babcock is a certified criminal defense specialist who has been defending the Southern California community in drug cases, tunnel cases, white collar crime, trials and appeals for more than twenty-five years. Our law firm is not about rushing cases to judgment but consistently receiving the best results possible.

R.G. will be home well before Christmas and finally have the chance to hold his child who was born while he was in custody. We understand the importance of a case to you and your family members and in all state and federal criminal cases, we will always defend our clients to obtain the best results possible.